In preparation for the week 0 scrimmage on Saturday, team 4611 is cleaning up and making final adjustments on it’s prototype robot.

The electrical team moved the PD board and victors on the prototype robot. They also drilled holes into the board to feed wires through. They redid crimp ends on all the connections. The fabrication team removed the cardboard and created a max metal interior for it while the design team started to redesign the agitator. Other design team members worked on redesigning the driver’s stations. Fabricators moved the wheel shooter to the other side of the robot, removed the gear grabber, and remounted it.

The competition robot is still being worked on. Walls were put on the outside of it and pneumatic equipment on the inside of it. Mentors heated a sheet of glass to bend it and make a mechanism that will help balls go from the hopper into the shooter. 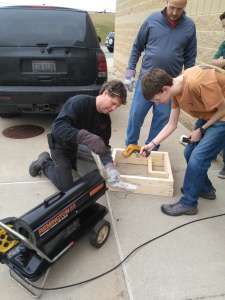 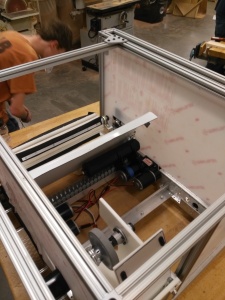 The electrical team is finishing up the other variable speed testers. Other members worked on rewiring batteries.

The drafting team worked on CADing out and 3D printing a kangaroo harness and sonar holder.

The programming team continues to test visual acquisition. They also are working on writing autonomous code, working with the test robot. Other coders worked on writing and testing code for the mecanum robot in between fabricators working on it.

View all posts by topfuel388

Want to Be a Part of the Team?

Team 4611 is a great learning opportunity to gain insight into engineering, teamwork, business, and design. We are open to all high school students in the Olentangy Local School District and would love to see mentors join our ranks.

Thank You To Our Sponsors